They say every cloud has a silver lining and to an extent this phrase can also be applied to the lockdown we endured earlier in the year.  With club runs put on hold for a couple of months, this provided the opportunity for many of our members to turn their attention to longer, solo, self-supported rides.  With pockets full of sandwiches, bars, etc. they set off to see just how far they could go un-assisted, with a few reaching the golden 100 mile mark.  With exercise being one of the few freedoms available to us, we also saw a re-emergence of some cyclists who hadn’t been out in a while, who now had the time to get out again as a result of the work/life balance being altered.

As the lockdown restrictions eased and we managed to re-instate our club runs, it was great to see some new faces joining us – most of whom have now joined up as fully fledged VCI members.  Usually around this time of year, many of our members would be targeting various sportives around the country, but with nothing on offer at the moment our Club Chairman David Cartmill (Sir Dave) came up with his own event for club members.  The idea was to hold a challenge that would be within reach of everyone in the club and that would provide a sense of achievement for everyone who took part.

One of the ‘rites of initiation’ for all cyclists in Northern Ireland is to complete a ‘Lap of the Lough’ (Lough Neagh) so this formed the basis of our challenge.  However, some clever route planning would ensure that everyone would also complete 100 miles.

Leaving Banbridge at around 8am, the group set off towards Portadown and out through country roads to the Birches and Maghery, where they got their first glimpse of the ‘mystical’ lough.  Colin commented that the lough was like something out of a fable, as they only saw it a handful of times throughout the 100miles, despite the route being based around the lough!  From Maghery, the group hugged the west side of the Lough as much as possible, until they reached Ballyronan Marina (approx. 40 miles into the trip) where they stopped for a well earned break.

Getting back on the road, a good steady pace was maintained, with Davy on the whistle, ensuring the group kept rolling through to share the load.  The craic was good in the bunch and everyone was well motivated to keep going, inspired by some of the stunning views of the lough.  This certainly helped to quell any nerves anyone may have had about completing a longer ride than they were used to.  Continuing along the shore, the group passed through Toome and followed the north side of the lough until they reached Randalstown and then dropped the hammer on the stretch to Antrim, spurred on by the thoughts of lunch.

With around 65 miles in the legs, the group arrived at Moes Grill in Antrim, where lunch had been pre-ordered.  Everyone enjoyed the food and one or two liquid refreshments, while the banter helped to keep everyone’s minds off their sore legs. 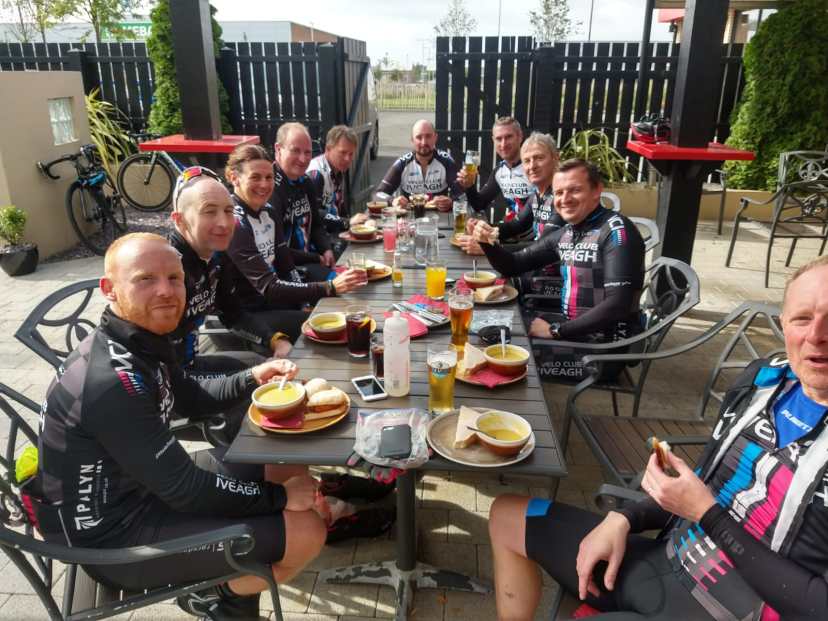 As many will know, the main problem with following any sort of a circular route is that you will inevitably run into a headwind at some stage.  As the group followed the lough shore to the outskirts of Lurgan, they faced a constant battle against a headwind – ordinarily not something that would cause too big an issue, but with 70+miles in the legs it certainly made things more challenging.  Again, Davy ensured people were rolling through quickly and spending no more than a minute or so on the front, in an effort to keep everyone as fresh as possible.  Davy’s tactics obviously worked, as some were still fresh enough towards the end of the trip to have a bit of a dig on the Broken Bridge Road heading back into Banbridge.

Arriving back into the town, some were glad to see home!  A minimum 100 or so miles completed by everyone, with a few hitting 120/125miles and Davy almost hitting 140!  Well done to all involved – especially those who were hitting 100 miles for the first time!  Also, a huge thank you on behalf of the club to Davy Cartmill for pulling this all together – organised down to the most minute detail as usual.

We asked a few club members to give us a few words to sum up their day:

Gordon Brown: “Great club spin on a more or less perfect day weather-wise.  Really enjoyed it, craic was good and my first ever lap and first ton to boot.  Looking forward to the next time!”

Jonathan Dundas: “Great day on the VCI Lap of the Lough.  My third time around the lough this year, but my first time breaking the 100 mile mark – a nice round 200km (or 124 miles for the older folk).”

Colin Abernethy: “I thoroughly enjoyed the VCI ‘Mystical’ Lap of the Lough!  It was great getting out with good company for a very enjoyable social ride.  Good banter, enjoyable pace, everyone keeping together and looking after everyone.   A really great day out on the bike!”

Warren Jardine: “Saturday was my first ever Lap of the Lough, as well as my fist 100 mile spin this year.  Hopefully this will become an annual event and we can get even more members out next year!”

Geoff Harrison: “My second time doing the lough, but first with VCI.  A great day, good team work and a good laugh.  I was well looked after as only being a new member.”

Peter Elliot: “Really enjoyed the club run around the Lough. Not my first time doing ‘the lap’ but was nice to do it in dry conditions! Being new to the club meant it was a good opportunity to get to know some of the members a bit better also. And it was my first time surpassing the 100 miles mark.”

Kerry Porter: “Day of firsts for me – first 100 miles; first Lap of the Lough and first G&T on the road!  Can’t wait for seconds!  Huge thanks to DC for organising and to all the guys for their encouragement along the way!”