James Dane recently joined the club after attending some of our midweek races and weekend runs.  He has his first bite at A4 racing on Saturday 2nd March at Banbridge Cycling Club’s annual Annaclone race.  It wasn’t the best weather for Jame’s first outing but as always a well run and attended race, with great support along the way from the general public.  Here is a few words from James on his 1st experience:-

On March the 2nd on the first weekend of the 2019 race season I took part in the Travers Engineering Annaclone Road Race, and it was my first experience of an open race road race. I had gathered some experience of racing events by taking part in Inter club league events during the 2018 season. This not only gave me the bug for cycling but also demonstrated the level of fitness and strength that would be required to just keep up in a race. 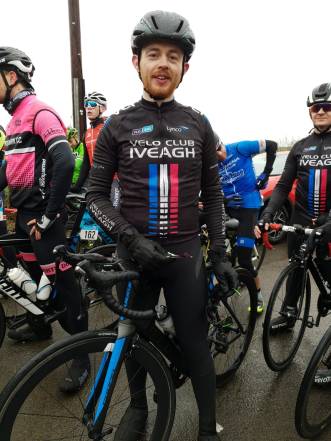 As soon as the race events ended and the dark nights set in, I began my preparations for the 2019 season, and during this time I joined Velo Club Iveagh for their 9:03 Saturday club runs, and shortly after became a member of the club. This helped me on through the winter as it not only gave consistency to my training but pushed me on when the weather wasn’t great or when I might not have wanted to go up Spelga Dam or time trial down the Warrenpoint carriage way, but it also gave me a measurement to see where I was against better cyclists. So, I would like to that everyone that have helped and pushed me along this winter.

The day of the race arrived and with some nerves, and hope that I had done enough training during the winter; and that the weather forecast was not going to be as bad as forecasted! I made my way to the sign on point in annaclone Gaa building. Unfortunately, the weather was not ideal for my first event as it was a very wet and windy day, but I was still looking forward to taking part.

I began the race with all the plans and advice that people gave me going through my head, but very quickly this was all thrown out the window, as it became very obvious that things don’t work to plan in a road race, and I just tried my best to get into a rhythm and position myself to give myself as best a chance as I could.

The race at the start was very stop start, with some hard braking happening further back in the bunch as we made our way through Annaclone, so in an attempt to avoid this I made my way further up the pack. As we made our way to Mays corner, I noticed William Strain making his way up to the bunch, and so, I decided that I would to follow him.  I was expecting to find him somewhere near the front but just as I got sight of the to the front of the bunch a break away took off with William at the front. I managed to catch up and stick with the break away for another few miles until the fast pace caught up on me.

I dropped off and was soon back in the main group. I stayed with the group for another lap and felt strong but unfortunately not strong enough to keep up with the pace that was being set by the break away group. I made my way around the circuit and was always in and around the front and feeling ok, but unfortunately on the 3rd lap of 5 just as we turned onto the main road to Annaclone from Banbridge at the petrol station, I decided to position myself to the left side of the road to try to shelter myself from the south blowing wind. I had just settled behind someone after a sprint after the corner when with a pop and hiss my race was over. I had hit a pot hole and punctured both wheels on a pothole.

I was disappointed that I had to pull out of the race this way, but was happy to that point that I managed to keep up, and felt like I could have completed the race. It was a learning curve and great experience.

I am looking forward to the next event, and will be looking even harder for any potholes!