On the verge of an amber weather warning for high winds and storm Hector, event 2 in this year’s Inter Club series, saw riders met with the initial salvo from Hector. With steady rain and an average 17mph southerly wind gusting to much greater, this was an evening for the brave. Even the local ducks had taken to walking.

With a fairly difficult route set out to test competitors over an undulating 11.5mile one directional circuit, it was the knowledge of several well known hills on the route that made things interesting even before the start. Road Bike or specialist Time Trial Bike? And as the event began it was clear there would be a fairly equal number of both with many of the acknowledged local time trialists choosing to man handle the TT bike, around the hills and against the wind.

The first 5 miles out to McCoys garage saw riders battle strong side and headwinds with little break or shelter. This took more out of the legs than many had hoped, with the next 6 or so miles expected to be more challenging with the hills ahead. Turning left at McCoys and heading towards and over Cattle Hill there was a welcome tailwind, though those with rear disc wheels continued to battle against sudden directional changes of the wind and a rear wheel that was eager to step out given the chance. Over Cattle Hill and close to max heart beat, it was a fairly fast run towards the Gallbog road junction, which was passed rapidly as riders tried to carry speed into the hills that lay ahead, before the Drumneath Rd. Onto the narrower and more sheltered Drumneath Road, it was now give it everything on the final twists, turns and decents to the finish and the end of a great testing route. 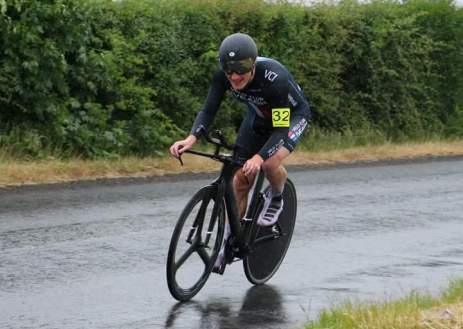 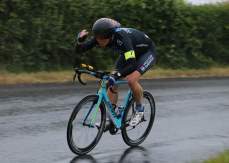 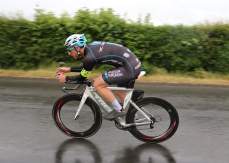 Fastest actual time of the night was posted by visiting rider Ciaran Cahoon of Clan Eirean. Ciaran recorded  a 27.16 which was immense given the conditions. As a handicapped competition within the league series, it was John Buller of BCC who was quickest, going 1.08 below his target of 29.05. BCC took an incredible 9 of the top 10 positions and rolled out easy winners of the event taking the 4 league points on offer. Second on the night were TVR with VCI 3rd and CCC a close 4th.

This is CCC’s first year of mixing it up with local clubs and it has to be said they are doing an admirable job in great spirit and enthusiasm.

For VCI John Davidson was placed highest in position with handicap applied at  a mere 7secs over his target of 29.08. Fastest actual time was that TT warrior Neil Seffen who posted a very creditable 28.43.

Although 3rd as a club on the night with handicaps applied, solace can be taken knowing that in the top 20 actual times BCC had 8 riders, VCI had 7, TVR had 3 and CCC 1.

Our thanks to all those who supported the event both as rider and supporting staff. This was a hard night for both, having to endure a fairly dramatic change from the recent good spell of sun. Our next event rolls in next Wednesday with the second of our 4 Road Races, this time on the Annaclonne Circuit, often a heart breaking seasonal opener for those involved in the open racing scene.

Look forward to round 3 next week and your support.