Earlier this month, VCI club member Gordon Brown traveled over to London with his wife Jan and two other friends (Debbie and Alistair Cairns from Waringstown) to take part in the Palace to Palace cycle ride from Buckingham Palace to Windsor Castle, all in aid of The Prince’s Trust on 1st October.

They cycled the Classic 45-mile route together which started at Buckingham Palace, finishing at the Royal Windsor Racecourse just after passing by Windsor Castle.

A very scenic route starting early (8am) on the Mall riding up to the Palace and taking in many London sights including the Tate Gallery, Royal Chelsea Hospital and then through Fulham past Battersea Park over the Putney Bridge and out to the first water stop amongst the deer at Richmond Park. Then on via Bushy Park/Hampton Court through the Surrey countryside passing through Sunbury, Chertsey, another water stop at Chobham and then finally into Windsor. In Windsor the route passed by Home Park and Windsor Castle before finishing at the racecourse.

At the finish line, they were able to meet both David Weir and Chris Froome as they were both present as Prince’s Trust ambassadors for the event. Gordon spent some time talking to Chris about his successes this year in Le Tour and La Vuelta – congratulating Chris on his win on Stage 10 in La Vuelta and his sprint finish to secure the Green Jersey on the final day in Madrid. Chris was very friendly and open and said that he was taking a break at the minute before ramping up the training for next year. It sounds like an attempt at the Giro next year may be on the cards – but he wants to have a look at the route first. Obviously, Gordon tried to sign Chris up for next season, but sadly it would seem Chris has no plans to base himself out of Scarva just yet…

As well as being a very memorable and enjoyable event, it has raised a fantastic total of £450,000 this year and Gordon and Jan themselves raised £660 by taking part. The Prince’s Trust will use these funds to change the lives of disadvantaged young people across the UK. 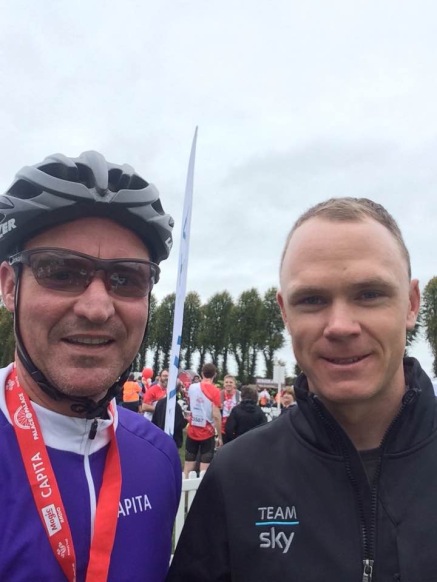 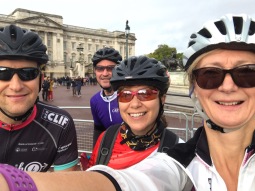