Another busy day saw Velo Club IVEAGH in the mix in Cookstown, Lisburn, London and Madrid.

Race day at the Mid Ulster GP outside Cookstown saw the club represented at A2 level with Neil Seffen and at A4 level a very potent team with Junior Burns, Mark Johnston and John Davidson.

The Mid Ulster like so many other races offers a good mix of rolling hills, testing drags, fast turns and technical sections, all of which require a good line and/or the right field position to stay in contention. With the circuit familiar to our senior rider Neil (on old stomping ground) some beneficial advice and knowledge was passed on, to help prepare the guys for the race ahead. Confident of what lay ahead and in a race with a parcour similar to previous races, the race got going with pace and some early attacks to test the field. Several strong break attempts were made in the first few laps but were doomed to failure. 4 laps gave plenty of time to study the competition and the  fast downhill sprint towards the finish line.  Chasing down attacks and attacking the hills to stay in contention, coming into the final lap and still all together it was time for decisions. Whos wheel was safe and fast, where to be on the finish approach we now knew. All 3 still in contention and with a tail wind picked up and held the pace as they approached the line for the bunch finish. John Davidson “With the full width of the road filled with cyclists battling for there postioning ducking, weaving, braking sharply it was manic, boys being boxed in & losing momentum”

As all 3 approached the run in, it was crucial to be in the right place, unfortunate for Junior he had to check his run, Mark faired a little better but he too was blocked having been third wheel with the finish in sight. John Davidson however, fought his way through the gaps and with the power to push on to the line he claimed a photo finish for 2nd/3rd. Pipped by a tyre bredth John was given 3rd. Mark and Junior both rolled in around 10th in what was yet another strong performance.  This is a fantastic result for John, whom in only a handful of races has taken a 10th place at Killinchy GP and now 3rd 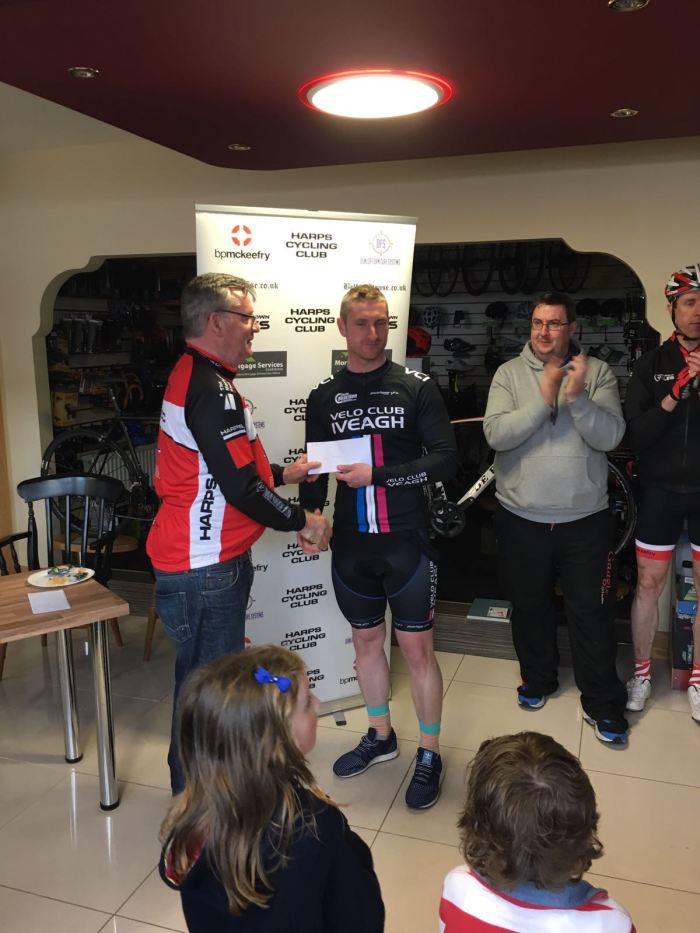 Words by Neil Seffen. ” The course was undulating, with no real sections to recover on & personally one of the hardest, attritional circuits out there, that just breaks you down a bit more each lap! The A3/Junior group had an advantage of 3 minutes which should have been easily bridged by the large A1/2 combined group; however there seemed to be a reluctance of the A1’s to work together as they constantly attacked, trying to individually cross the gap. 5 riders eventually got across & what was left of the A3/Junior maintained their advantage to take the points & prizes on offer. As with every race, the A1/2 group still contested the sprint & I came across in 6th place from the bunch. A hard day in the saddle!!! “

Else where we had club members take part in a number of events.

Stephen Pepper completed the London Marathon crossing the line in 6911 place, in a time of 3hr 33min 27secs. Stephen Pepper “Disappointing time for me, wasn’t feeling 100% and had to really grind out last 8 miles just to finish. Unbelievable atmosphere at it though and a fantastic experience”.

Gordon Brown took part in the Madrid Half Marathon finishing 2353 place and completing the run in 1hr 50min 11 sec. Gordon Brown  “It was hot and hard and a bit longer than the proscribed distance, but an amazing experience. I’m sunburnt and knackered but grinning from ear to ear”