It was another full on race day for Velo Club IVEAGH, with nine riders involved at two separate venues, At the East Tyrone GP we had 7 involved in the A4 and Masters Race and a further 2 in Stamullan in an Open Race combining A1 to A4.

This week saw Ivan and Davy join Ronnie in the Masters with Mervyn absent completing a Paris Roubaix challenge. Ivan back after some absence was to find the pace in this his first race for some time a little sharper than anticipated or desired. Davy having moved from A4 this week into the Masters found the pace equal to the A4 and again sharper than desired on the asents on this hilly and rolling circuit. Both he and Ivan unfortunately lost the wheel in front on climbs and were left to race in a second group as the main field drove on . Staying in the front group Ronnie in his third race and on the back of improving results and an 8th at he Hilly PJ Logan, again showed good form and was there mixing it up throughout. As the race came to a close, with two out front for almost the entire race the main field closed fast in a race for third. Finishing with the sprinters on the fast run in Ronnie came home in an confirmed 8th in a close finish.

This week our A4’s were represented by Mark, Junior, JD and Gordy. Mark was the only rider to have knowledge of the circuit having taken part last year and knew what to expect,  however, after today’s race admitted, this time around he had found the race had been extremely difficult with him going backwards on many of the sharp hills. Gordy although an extremely powerful rider, on this circuit was finding it difficult with the speed up the hills and being a big unit drifted back and out of contention. JD, Mark and Junior pushing on held onto the main bunch as the race progressed onwards. All 3 dI’d some quality training over the winter and focused a fair bit on hill repeats, therefore the hills weren’t a major issue. Sadly, late in the race JD had to retire due to the onset of back pains and clearly we hope this is only a minor setback and one he will recover quickly from. Coming to the close, still well placed Mark and Junior raced on, however, on the final sharp hill before the finish Mark found himself badly placed and his race, so far as a top 10 finish over. Junior better placed managed a good run in and finished well up the bunch in the top 15/20.

6 by 5mile laps on a punchy course, with the hills & drags out of Stamullen village to the finish line proving decisive in the final split of the main peloton. 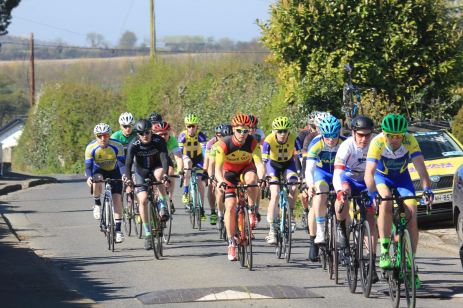 With this being a combination race handicaps were in to allow group intervals. Around 20 A4’s started off in the first group and we’re being chased by the 20 riders in the A3/juniors group Final group off were the A1/2’s released with about 40 riders. With a fast pace being set and an average speed of around 26mph, the A3 group was caught on the 2nd lap by the A1/2 group and what remained of the A4 group was caught on the climbing section on the 3rd lap. With UCD & Aqua Blue academy riders attacking the peloton, the climb was the worst part of the course for William (in his 1st race) to try to stay with the front group. William would finish the race in a smaller group, but full of confidence & enthusiasm for his next race. Neil lost the main group just as the penultimate lap was starting when a junior rider decided to break on the fast decent between climbs allowing a gap of 20-30m’s to open, which proved too difficult to bridge across to, with the race at full speed. A good day out & the 1st tan lines of the year with the hotter than recent weather