Race one and the ever present turbulence of open level racing, mixed with the early season form,  or not,  brought mixed fortunes for VC Iveagh, like so many other competing clubs.

Setup and race management was once again a major credit to Banbridge CC who were slick, organised and in total control. And with their glowing reputation as hosts, came a big entrance in both the main and support races.  In the main race (A1, 2 and 3) Neil Seffen represented the club, although was slightly under the weather after recent ilness and by rights, probably should have defered entry owing to illness. 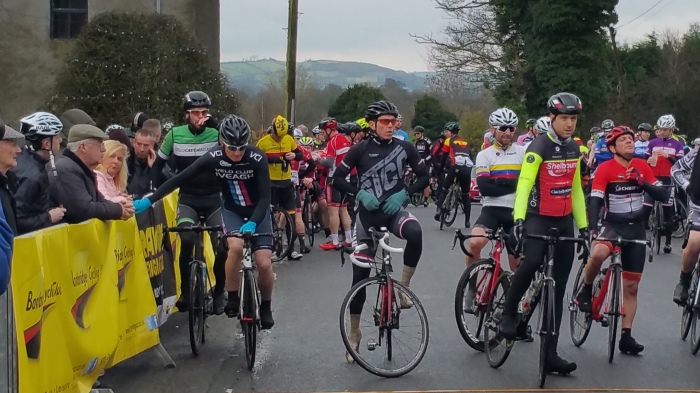 However, bravado and that willingness to get out there took him to the start line, although sadly bravado alone could not fuel him and he withdrew after several difficult laps and an overpowering weakness. 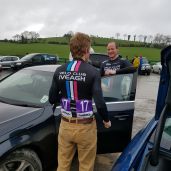 In the support race we had 5 riders, Mark, Josh, Junior, Gordon and Davy. It was clear right from the start that the winter work had paid off, as all 5 were well placed in the main bunch. As the race progressed however, and the digs on every hill continued, our seasoned campaigner Davy, lost the wheel in front on the third of four passes at May’s Corner. This had him quickly dislodged as the speeding bunch opened up a gap that he could not come back from.  Davy withdrew shortly after and joining others from the club to get behind the others still in the mix. Of the remaining four all continued well placed and right in the fight, however misfortune came upon Gordon, as he was taken down in a crash on the final lap. With the rider in front going down Gordon simply had no where place to go and joined several others embroiled in the spill. Thankfully physically he is fine although the same can’t be said for his expensive front Cosmic wheel. Gordon we all wish you a speedy recovery.

As the race drew to a close all three remaining riders crossed the line in the main bunch, sadly though, none were able to challenge in the sprint owing to the bunch rather sporadically moving around and filling the road. All three were boxed in and shut out, however more importantly crossed the line safely.

Massive well done to all whom competed in club colours, in what were hard and dirty condition’s.  Rather amusingly all had finished like they had finished the Roubaix, with dirt from head to toe. Lastly it was great to see huge support today, with many of the club there to encourage and cheer the guys on.

Lessons learnt, knowledge banked we move on to the many races ahead.