With VC Iveagh starting to get good racing miles into the legs, it seems results are starting to fall into place. For the second race in a row we have had finishers within the top ten and steadily getting stronger week on week. This was the turn of the Ciclisport GP organised by East Tyrone CC, a tough little course that certainly tests the fitness levels. Once more a few of the VC Iveagh lads give their views on the race and look ahead to how things are panning out this season. 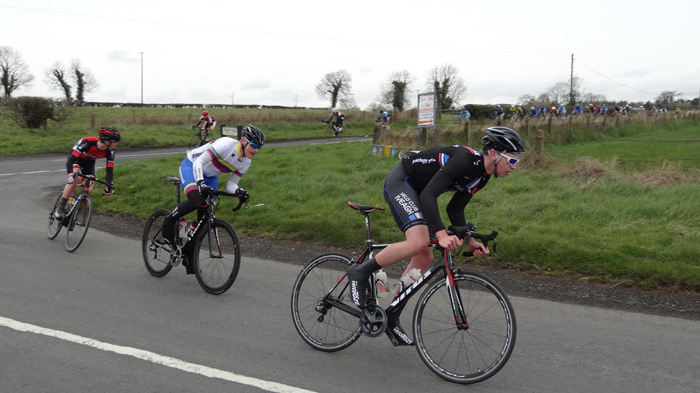 Dan Gordon:
After having a few days rest and feeling good in training, I felt confident heading into the Ciclisport GP. I was looking forward to getting my support team back for this race; With an extra teammate in the shape of Neil Seffen aka rocket, also an added bonus was Dave Cartmill aka Sir Dave doing team car/moral support along the road and not forgetting an ever supporting Ruth.

After the usual pre-race chat, I headed out on a warm up, legs felt stiff, but yet I felt like today was going to be a good days racing. After the usual obligatory team photographs, i rolled to the start with Neil.

Whistle blown, Garmin started and away we went up the first drag. As far as I remember the most of the first lap was pretty settled, with any attacks being brought back, on the second lap I decided to spice things up and test the legs a few times, I did manage to hang out front for most of the second lap, but with no one joining me I was soon reeled in. During laps 3 and 4 I mostly hid 5-10 men back in the bunch, although the legs were still being tested with continuous attacks.

On to the Final lap, a group of two got up the road and had a gap of about 30-40 seconds, I thought the race was won from those two; however what happened next made me extremely proud to be a member of VC Iveagh. With not to many willing on working to pull the break back, Neil rolled up beside me, asked me how I felt, I shouted great! Neil then willing to let his own chances in the sprint go went to the front and for the most of the last lap drilled it on the front for me, between him and a few other lads they pulled it back and set it up for a bunch sprint.

Into the last mile and the nerves nearly got the better of me, but I knew I couldn’t back out after all the work that was done to get me in this position. Sitting 4-5 men back in the line, I thought I was in for a simple leadout but, sadly nothings easy in cycling and so the front 2-3 lads kicked and I had to follow bringing the bunch with me.

Last 500 meters and I was still 5 places back, I opened up my sprint perhaps slightly early and went for it, I ended up slowing letting a few past me, but ended the race in 6th Position. I was delighted; thanks to the work of the mighty VCI Rocket I managed to get another 5 points!

Overall, it was a great race, with plenty to take away and learn, perhaps next time il sit in a little longer in the leadout and save a bit more energy and be fighting for a podium place! Having to take a break with uni restraints the next few weeks I can’t wait to get back racing and reach my goal of becoming an A2 before the years out! 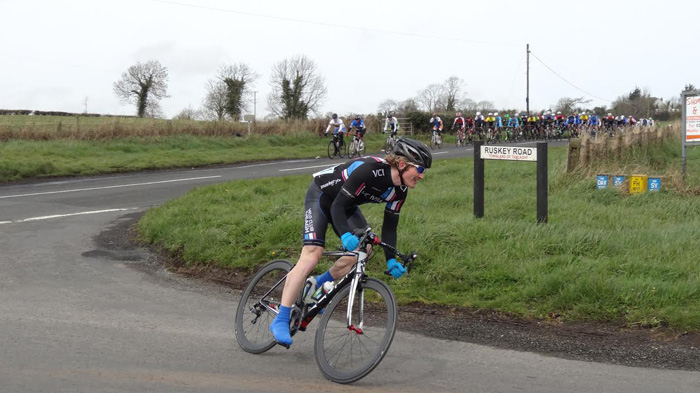 Neil Seffen:
To sum this race up in one word…misleading!!!  To sum it up in three words…bloody tough going!

It started off as a Sunday morning bun run, cruising up the first drag at around 15-16mph, riders chatting away & taking in the scenery!  However, Dan decided it was time to attack the group & off he went.  But the reaction from the group wasn’t forthcoming & only a couple of riders jumped across to Dan & eventually they started to open up a bit of a gap.  This did cause the group to react & eventually they were reeled in.  This meant it was now my turn & off the front I went just before the last turn at Coagh & I opened up a bit of gap, to be joined by Dan as the VCI duo tried to lead the race from start to finish.  It was never to be & the peloton closed the break down on the last climb before the start/finish line of the first lap.

Throughout the race there appeared to be no real desire to get up the road; maybe in part to the brutal nature of the undulating course or the fact that the pace was high and from the 3rd lap of five, the attacks on the back straight started about 2 miles out from the finish line, with the 2 climbs situated in the last mile being drilled every time as this was seen as a launch pad for where the strong riders were going to whittle down the peloton for the remaining 2 laps.

In comparison to the opening miles of this race, the last miles were as hard as racing as I’ve done this season & at one stage I thought I was gone off the back, but good positioning towards the front of the group allowed me that little bit of slip room to stay in the main group.

On the last lap 2 riders did manage to get away and the shouts from the side of the road suggested they had 30seconds.  On hearing this & on hearing my legs screaming I knew I wouldn’t be up to much in the sprint; so after a brief discussion with Dan the chase was on & the pair out front were caught & the race did settle down until the last climb & that’s where it kicked off for the final time.  Dan sprinted for a superb 6th place & I came in at the back of the front group around 20th place (I reckon).

Good race and good craic with the VCI crew that were there! 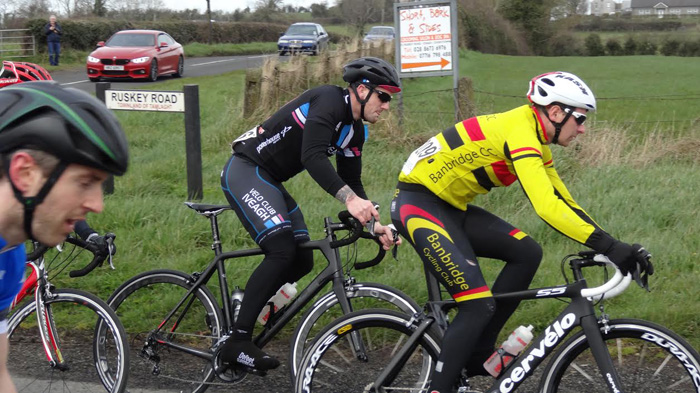 Mark Johnston:
Race number 4 for me was the cicli-sport GP and from what team mates had been saying it was going to be a hard enough course. After a good warm up along some of the route I knew the parts that I wouldn’t be strong in so knew I’d need good position or I’d be dropped. Like the Lucan GP I found it hard to get position maybe just down to inexperience and for most of the 4 laps I was in the back third of the group.

Being at the back it was hard to see what was going on up at front I did see a few try a break maybe one or two riders but they didn’t get to far. The short but steep climbs didn’t seem to catch me out it was a fast downhill left hand bend that caught me out every time that lead into a left turn and a lot of acceleration out of that turn, the peloton was stretched away out but soon bunched back up, with the final 2-3 miles myself and 2 other riders lost touch with the group and we tried working together to pull it back but it was to late we just didn’t have the legs and speed, we did finish but own our own a few minutes behind the main group.