Tis the season…. Well, perhaps not to be jolly but certainly to get the summer bike dusted off, chain and components lubricated and training miles racked up because ‘Sportive Season’ has arrived once more. It’s that time of the year when throughout the land many a cyclist comes out of hibernation to join their winter brethren on the ravaged tarmac for coffee, banter and training. One of the first on the calendar is the Spring 60 organised by Camlough CC, a popular sportive that draws a good number of cyclists every year and is always organised with great gusto. However this year it seems a good number of cyclists was significantly swelled and I have subsequently found out that the number was an extremely impressive 430.

This year VC Iveagh had eight members in attendance, a mix of battle hardened, new to cycling and a few coming back from injury, so it was definitely an eclectic mix. Rolling in for sign-on just before 9am, we congregated just outside the small GAA hall that would be used as a base for the day and checked out each other’s kit, bikes  and of course tried to gauge fitness levels. Let’s be honest, we all want to know how others are fairing in relation to our own training. To my surprise a few ‘summer’ bikes had managed to sneak into the VC Iveagh ranks even this early in the year, things were getting serious.

So once everyone had signed-on, made their last minute checks and fell in with their respective clubs we made our way to the start line for the 10am off. As is usual with these types of events there was great camaraderie between the many clubs while waiting for the off, the sun was out and I had a feeling this was going to be a quick route. Unfortunately with all the hustle and bustle of riders and clubs jostling for position, we dropped three of our group almost immediately but as this was a short sportive with the half way stop only 20 miles ‘up the road’ the decision was taken to push on. 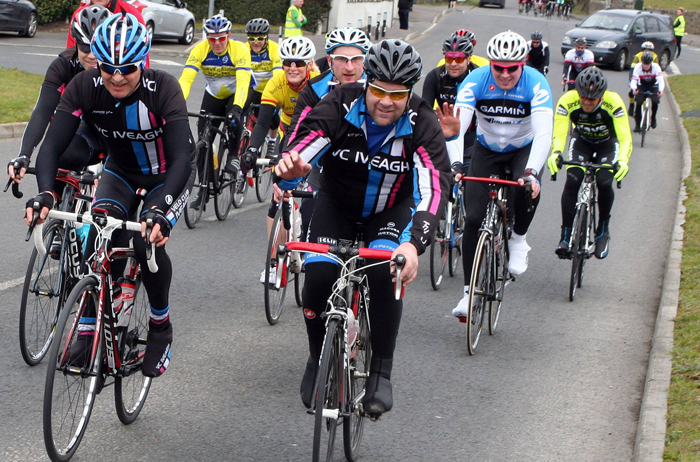 Now maybe it was the weather, perhaps the number of racers that seemed not to be racing that weekend and decided to take part in the Spring 60 but approaching our half way stop at the wonderful Fitzpatricks Restaurant in Co. Louth, I realised we were pushing a 22mph average. Let me hasten to add, this is not a normal sportive average, especially one of the first of the year. Yet the five of us felt comfortable and could have pushed a lot more but that is not what a sportive is all about, it’s about taking in the wonderful rural surroundings, socializing with colleagues and making new acquaintances. Once  fed, watered and having grouped as a club once more we decided to take things just a little easier on the return with a couple of the guys taking a more leisurely pace and enjoying the unseasonable sunshine. 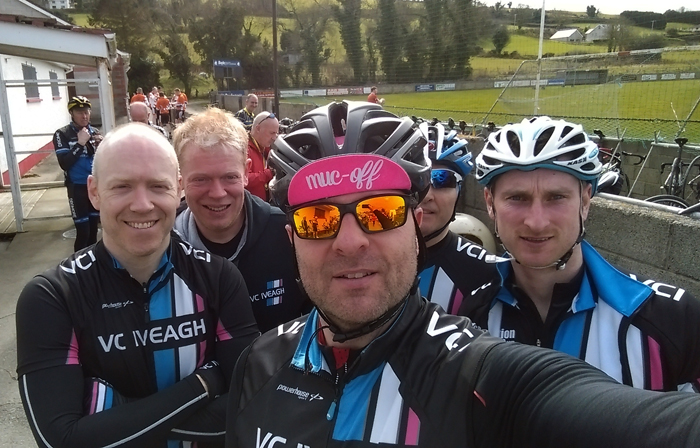 Rolling, or should that be racing? Back into Camlough the discussion turned to all things Sportive, there is no doubt that Camlough CC put on a great event for a great cause, this year it was for ‘Thumbs up for Harvey’ a sensory play area for severely disabled children. I would recommend the Spring 60 to everyone who wants’ to ease their way into the season ahead, all the VC Iveagh guys caught the new season bug and with the Iveagh Spring Classic just around the corner the Spring 60 couldn’t have come at a better time. So the only other thing to do is thank Camlough CC for organizing yet another great event and who knows, perhaps we will catch you all once more at the ‘Hog Run’.