Another weekend, another race, this time it was the turn of the John Moore Memorial GP hosted by Castlereagh CC. The John Moore GP is one of the flagship races of the season and always draws a strong field of riders, this year was no exception. VC Iveagh had two riders take part, Neil ‘Rocket’ Seffen racing the A3 category and new boy Mark ‘Jonto’ Johnston in only his second race was taking part in the A4 category. Both riders give their perspective of the race below: 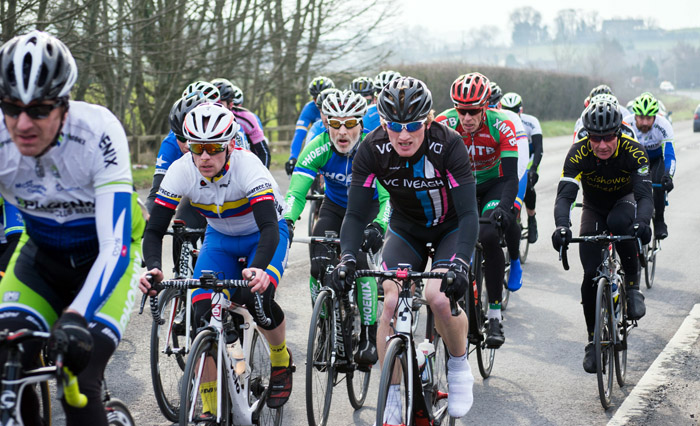 Neil Seffen:
On a cold February morning the John Moore Memorial was held in Carryduff; with the course switching back to the traditional circuit after concerns were raised about the quality of the road surface.

With the sunshine out, I thought ‘why not’ and got the legs out…make a head start on the cycling tan, despite wearing winter thermal gear on every other body part!!!

With the handicaps set at 3 minutes to the A2 group and 3 minutes to the A1 group, the chat on the start line wasn’t that we would stay away, but more that if we work together, let’s make it hard for the pro’s to catch!  Needless to say the A3 group didn’t work as a well-oiled machine; probably with around 15-20 riders taking their turn on the front and then with 2 to 3 riders going off the front every couple of miles, the rhythm just didn’t happen.

Eventually the combined A1/2 group caught on the 5th lap of 8, however just before the bridge was made about 8 riders had went off the front, opening up a gap of 30-40 seconds and with the A3 group worrying about the catch from behind, the break just kind of happened without any real effort to chase it down. The attempts by the pro’s to bridge this gap came fast and furious with riders going off the front continuously for the next 2 laps.  However, none of them stuck until the last lap where a concentrated effort by about 10 riders saw the bridge made to the breakaway and this group stayed clear to the finish with Roger Aiken claiming his second win in as many weeks.  I rolled home in the peloton, content that the legs had improved from Annaclone and now looking forward to my first A3 only race in Omagh next weekend. 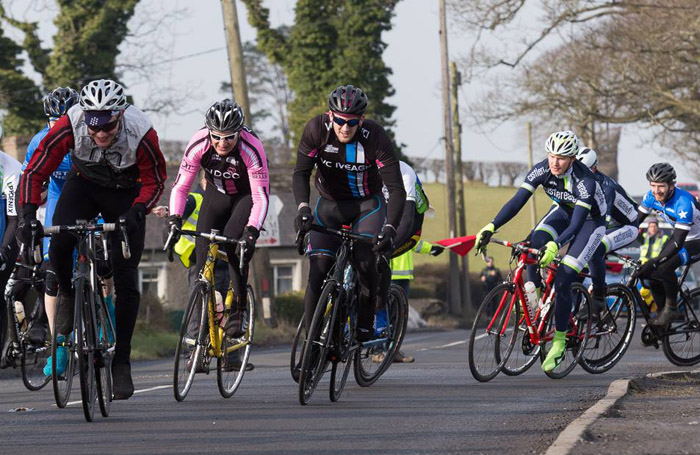 Mark Johnston:
I arrived at Carryduff Baptist church at 8.45am for sign-on and to get a lap of the new circuit, this was my first time on these roads so it was imperative to get a feel for the course.

This year Castlereagh CC had decided to change the route so I couldn’t get much information regarding the new course from my club mates; it seemed it would be new to everyone. The first thing I noticed was that the road service was very poor and extremely slippery in places due to gravel, ice and dirt run off from fields.  Cycling back to the start/finish line I was told the race would be reverting back to the old circuit due to ice and general road condition, this didn’t make a big difference to myself but was a definite advantage for the old course veterans.

After racing the Annaclone GP the previous weekend and not finishing, I was determined to finish this one, I learned the hard way that position was crucial. This time around I managed to stay within the top third of the group, when I did slip back due to some short climbs I was never off the back and able to move back up once it flattened out. There were no real attacks off the front and anyone that tried to get away got reeled in fairly quickly, this of course meant the race finished in a large bunch sprint. I had decided early on not to contest this race but rather use it for more gained experience, so I just stayed within the pack and let the sprinters go for the placings. There were a few near misses but thankfully everyone stayed upright.