Perhaps as with all clubs, VC Iveagh have a number of ‘tinkers’ (as opposed to thinkers) who will spend numerous hours ‘tinkering’ with every aspect of their bikes. On occasion this tinkering will far exceed the mere adjustment of gears or setting of stack height and a full custom build will be the only way to satiate the tinkering desire. Components will be purchased from near and far, often relying on the Royal Mail delivering said components on time. I mean lets be honest, it’s no good setting a Saturday morning aside if you have nothing to tinker with. Recently one of our club stalwarts decided to fully custom build a Kinesis RaceLight from the ground up, this was to be a winter bike that would carry him though the roughest of months, a bike that would laugh in the face of winter adversity, salty roads, minus temperatures and ultimately a bike that would set the foundations for the season ahead. 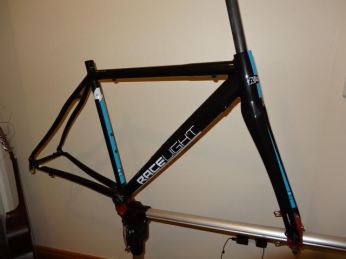 One of the most important factors to take into consideration when putting a custom build together is component choice. There is a fine line between building a lightweight race bike that will see out the winter months and a winter work horse that doesn’t feel like you are pulling a tractor to the nearest coffee stop. The build must have a mix of proven components that have been exhaustively tested in every cycling magazine known to man and that are priced economically enough to justify the additional expense to the ‘other half’. Many hours will be spent chatting with club mates or online pouring over reviews and pricing, Google shopping has never been so popular. On this particular build our recently crowned ‘Clubman of the Year’ Davy Cartmill went for a mix of the tried and trusted and one of the best groupsets currently available, Shimano Ultegra. Ultegra is merely a trickle down from the all conquering Dura Ace and can be found on everything from high-end race bikes to sturdy and dependable tourers. The down side is of course the price, it’s not in the realms of Dura Ace but it’s certainly a big step up from 105 which would have equally been at home on the Kinesis. It is certainly a big call to fit Ultegra to the winter bike but at least you know what you are getting. Ultegra is to road cycling as Samuel L. Jackson is to the movie industry; you know you are going to get a great performance regardless of the other actors. The only corner cut on the groupset was with the brakes, rather than Ultegra Davy plumped for Shimano R series. A really good set of up-graded pads would of course rectify this somewhat, there is nothing worse than degradation of stopping power caused by wet road grime. 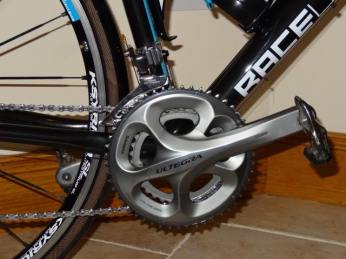 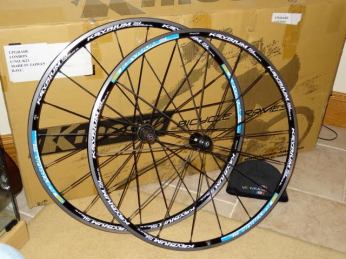 Moving on from the groupset the next biggest choice to be made was wheels and what a minefield that can be. There is no other component on the bike that can change the feel more than a wheelset, it can define the ride. There are literally a plethora of wheel choices available but of course the choice must take the winter months into consideration. This is a harsh time of year for all components and wheels are just as susceptible as any other component if not more so. Winter bikes are by nature quite heavy with weightier components and generally alloy framesets used, so the last thing you want is a wheelset that feels like they might possibly have 1970’s dynamos stuck to both rims. Anyone over the age or forty will no doubt empathize with this statement.  The other thing about wheel choice is that it’s very much experience driven, Davy has cycled thousands of miles on numerous makes and models so he knows a good wheelset when he tries one, well he at least talks a good wheelset review. For the Kinesis there was really only ever one choice, Mavic. Anyone with any experience will tell you that this famous old French company make some of the most reliable wheels on the marked today and standing above all models are the Ksyriums. The Mavic Ksyrium wheelsets are ranged from budget to high-end with everything in-between, most reviews generally state ‘bombproof’ and wax lyrical about the ‘bang for buck’ quality. Having used Mavic’s myself over the years, I have to concur.

So with the build nearing completion the last part of the winter puzzle was finishing kit. With the drivetrain and wheelset fitted it now comes down to the bike setup. Most people like to emulate the fit of their summer bikes, using a completely different set-up that’s been used for most of the year can cause muscle strain or even injury. Price is very much a factor at this stage and money can be saved by budgeting and looking for those all important online bargains. To put the final touches to his winter build Davy opted for the ever popular Ritchey finishing kit, spec’ing out his complete cockpit and seatpost from the American brand. Gearing is taken care of by Jagwire and the obligatory (venture out on a club run and you’ll see why) mudguards are supplied by SKS.

With the RaceLight completed in time for the winter months the only other ingredient required is motivation, of course coffee stops and buns help with this no end. I look forward to spending many an hour on the saddle beside Mr Cartmill on VC Iveagh club runs, gauging his opinion of this latest build and asking will it be tweaked in any way. Perhaps we shall return to this blog come the end of winter.